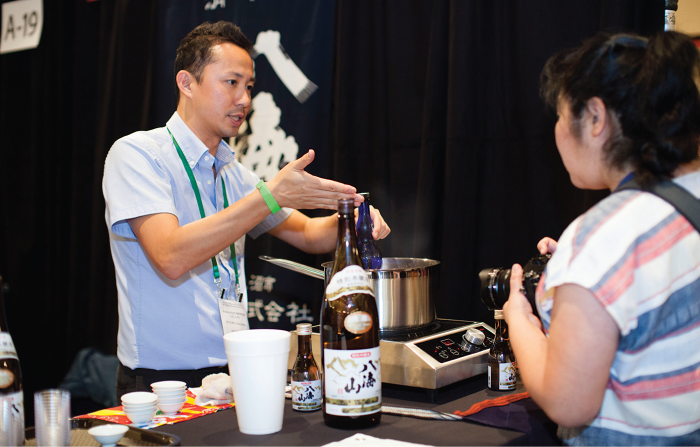 In the early 18th century when common folks in Japan began drinking Nuru-Kan warmed Sake, global warming wasn’t an issue where the autumn/winter months were much colder. And back then, houses were typically built using wood, soil, and paper. For obvious reasons, those homes had poor insulation where the cold draft easily passed through, therefore, people inevitably turned to drinking Nuru-Kan to keep themselves warm.

There is an old saying “kaze jyaki wo sake-ru” which is believed to be one of the theories behind the etymology of Sake. The phrase means “keep away cold wind evil”.

Another reason why Nuru-kan was such a popular drink during autumn and winter months was its influence meal enjoyment. Seasonal foods become increasingly abundant from autumn to winter, be it seafood or land-based foods, and Nuru-Kan beautifully highlights the flavors of dishes made with seasonal ingredients. Sake harmonizes the five basic tastes: sweet, sour, bitter, salty and Umami. Moreover, when heated, Sake turns more rich and mellow, which enhances flavors to a higher level for a wide variety of food.

Let's dig a little deeper and explore the appeal of Nuru-Kan.

“Kan-Agari” is a term used when the flavor of Sake improves due to warming. It literally means “Sake is improved when warmed”. Lactic acid, succinic acid, and amino acid are all Umami components that, when warmed, accentuates Umami further.

This is especially true for Sake made by Kimoto and Yamahai methods which utilize natural, airborne lactobacillus. Honjozo and Junmai type Sake are usually crafted from less polished rice, which contains more succinic and lactic acids, as well as peptide and amino acid to yield more depth in flavor.

“Kan-Agari”, is a very personal practice, where drinking experiences are felt differently by each person depending on each individual’s past in drinking warm Sake. So before serving Nuru-Kan, it’s important to ask customers their Nuru-Kan experience and their preferred Sake temperature. For example, by asking: “Have you had Nuru-Kan before? What is your preferred temperature?”

According to above chart, temperatures between 104 to 122 degrees Fahrenheit are the most ideal when serving warm Sake. It is Important to calculate the time from when the Sake completes warming up to when it actually reaches the customer. When serving Nuru-Kan, warm it roughly 5 to 9 Fahrenheit degrees higher than the target temperature, to make up for the time lag it takes to arrive at the guests’ table as it cools down to the ideal temperature.