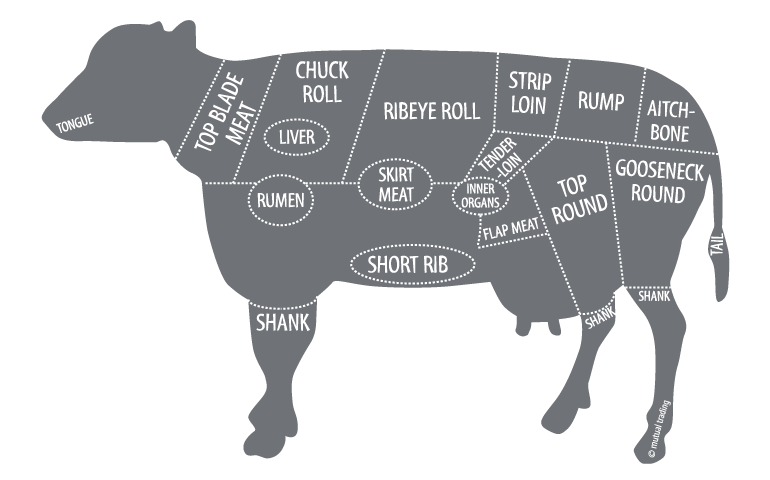 Arrival of Buddhist teachings in 700 AD and cultural factors caused Japanese emperors to prohibit consumption of beef and meats from other hoofed animals for more than a thousand years. Despite the ban, however, the practice of eating wild game, grilled or stewed, was a commonplace. In 1872 during the Meiji Era as Western influences entered Japan, an Emperor himself eats beef for the first time, thereafter giving way for the public to follow. Today, Japan raises prized cattle to win international acclaim.

Medium grade at the tip, increasing in quality towards the base.

Chuck Roll
Rich in aroma but relatively stringy with moderate fat. Recommended for use in Sukiyaki and Shabu Shabu.

Ribeye Roll: Very tasty and fine texture. Recommended for use in roast beef and steak.

Strip-Loin
The highest quality and most tender meat, with a touch of sweetness.

Rump:
Tender, red thigh meat, rich with flavor. Recommended for use in many dishes such as barbecue, Sukiyaki, Shabu Shabu, etc.

Aitchbone
The rump bone or floor of the pelvis, similar to dimples on a human’s hip cheek. An extremely small portion on a cattle, offering sweetness from marbling, combined with tasty red meat. Highly valued by connoisseurs.

Tail
Tail of the cattle, often used in tail soups. Through boiling, the collagen-rich tail dissolves to release a tasty flavor.

Gooseneck Round
The inner thigh, carrying the least amount of fat, where the meat quality is very even. Is recommended for use in large portions, as in roast beef.

Top Round
Inner thigh of cattle.Carrying the least amount of fat. Recommended for use in chunks such as roast beef as the meat quality is even.

Inner Organs
The general meaning is inner organs but the restricted meaning is large or small intenstines.

Flap Meat
Located near the fillet, called “Kai-no-mi” or shellfish meat in Japanese as the shape resembles a shellfish. Is an extremely prized cut, for there are only a pair of a small portion available for harvest. Is often used as boneless short rib.

Shank
Since this is a very active portion, is very stringy and tough. Through boiling, this collagen-rich cut makes for a tasty, tender serving. Minced shank meat is highly flavorful and is addictive.

Liver
The liver is the largest organ of the cattle. Overflowing in iron and nutrients, carnivores in the wild are known to target this portion to consume first.

Skirt Meat
The muscular part on either side of the diaphragm. Is very fatty and tasty.

Short Rib
Meat around the ribs. The texture is coarse with layers of red meat marbled with fat.

Just 1 more day until our virtual expo! Here’s a

Earn points and move up the leaderboard to win $50

For 30+ years, Mutual Trading has hosted the annua