What is Shochu? That is a question often asked by restaurant customers. While few associate Shochu to Korean Soju, to most, Shochu is just another Asian alcoholic beverage. However, despite the curiosity, most customers show little interest in the production process of Shochu.

So how do you explain what Shochu is? And how do you generate the customers' interest?

“Shochu is an alcoholic beverage imbibed for centuries in Kyushu region, the South of Japan.”

Generally speaking, when introducing an alcoholic beverage, the easiest way to explain is its origin. This will give customers an image that they can identify with. “Japan”, “South”, “Kyushu region”, and “centuries” are the key words. When customers hear that Shochu is from Japan, they expect Shochu to be different from Western spirits. The word “South”, to drinking aficionados, suggest that Shochu has high alcohol content. Furthermore, stating a specific region conveys the unique features of the land, and finally, the word “centuries” substantiate the quality of Shochu.

“Shochu is made typically from rice, barley, buckwheat, Thai rice, sweet potato, and brown sugar using a special process to retain the exquisite flavors of the ingredients.”

Identifying the ingredients makes Shochu seem more accessible much like wine and brandy (grapes), beer and whisky (barley) and Sake (rice). Adding a simple flavor description (by ingredients) will further help customers to familiarize with Shochu.

“The alcohol content for Shochu is 20-25%, slightly higher than wine or Sake.”

After disclosing 1 and 2, it is time to divulge that Shochu is a distilled spirits (similar to mezcal) and has higher alcohol content.

Note: When explaining what Shochu is, do not begin by declaring that it has high alcohol content. This will set an image and deter some customers from listening further. The alcohol content for Shochu is relatively low compared with other distilled spirits. Moreover, Shochu is typically served diluted with water (or ice) so the alcohol content is further reduced to the level of wine or Sake.

Flavor-wise, Shochu is comparable to tequila (mezcal) more than vodka or whisky because, after distillation, the former retains the flavor of the ingredients more like Shochu.

“Shochu pairs well with any meal.”

The best way to enjoy the flavor of Shochu is mizu-wari (diluted with water), straight, or on the rocks. That said, Shochu also makes a terrific base for delicious cocktails.

Describing Shochu – the various ingredients, technical process (single or multiple distillation, atmospheric or vacuum distillation), different yeasts, etc. – can be complicated. Instead of overwhelming the customers with complicated technical information, simplify and focus on the flavor characteristics of Shochu. 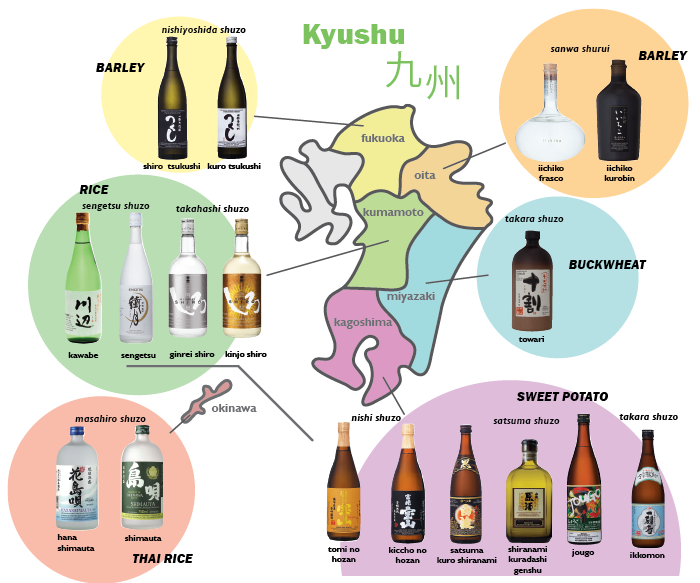 In the past, Shochu was often compared to vodka and whiskey. Vodka certainly is a type of white spirits and visually looks very much like Shochu, however, vodka undergoes multiple distillation that removes all the flavors and aromas of the base ingredients, while Shochu, on the other hand, goes through single distillation only once, so the flavors and aromas of the base ingredients remain. Shochu is also different from whisky and brandy. The latter are brown spirits, aged in wood barrels where the wood aroma, flavor, and texture are added.

In contrast, Shochu’s fermented mash (before distillation) and undiluted raw Shochu (after distillation) are not bitter and taste just like the ingredient it was made from. Among the various distilled spirits, Shochu is comparable to mezcal, the hottest new drink trend, a distilled spirits made from agave (similar to tequila). As the popularity of mezcal takes off globally, it is only a matter time till Shochu goes mainstream.