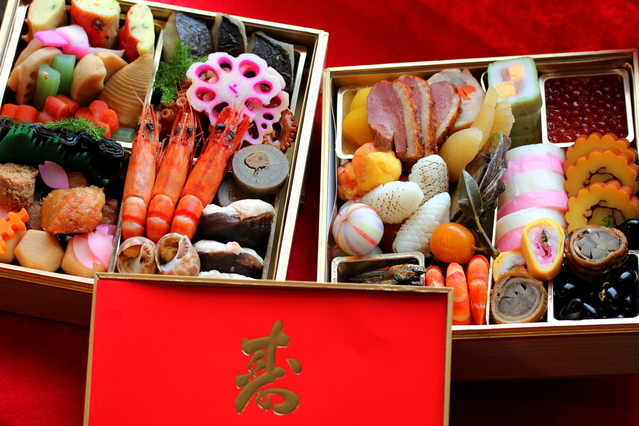 New Year is the single most important holiday in Japan, and special Osechi-ryōri are traditional Japanese New Year foods.  Colorful Osechi-ryōri dishes are packed in layers of lacquer boxes, called jubako, which resemble bento boxes.  Like bento boxes, jūbako are often kept stacked before and after use.

New Year's Day is one of the five seasonal festivals (sekku) in the old Imperial Court in Kyoto.  Originally, during the first three days of the New Year, it is a taboo to use a hearth and cook meals, so women finished cooking Osechi-ryōri by New Years Eve.

In the earlier days, Osechi-ryōri consisted mostly of Nimono, or boiled vegetables seasoned with soy sauce and sugar or Mirin.  Over many generations however, the variety of foods in the Osechi-ryōri has grown, where now, there are "Westernized Osechi" containing non-traditional ingredients.