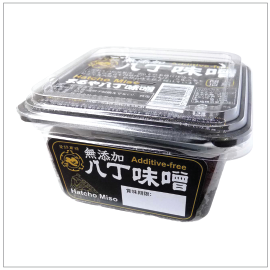 Maruya Hatcho miso is the oldest existing Hatcho miso maker in Japan. Situated in the heart of the Mikawa district of Aichi prefecture (approximately 60km east of Nagoya city), Hatcho miso draws its name from its proximity to the seat of power of Japan’s first Shogun, Ieyasu Tokugawa. Maruya Hatcho miso is made according to strictly traditional measures. Pure soybeans are steamed and then mashed. This then dusted with Koji. Around 6 tons of

Maruya Hatcho miso is made according to strictly traditional measures. First, soybeans are steamed and mashed, then dusted with Koji. Around 6 tons of soybean mash is then mixed into large wooden vat, with pure sea salt and natural spring water. Finally, the vat is then sealed with a lid, and up to 4 tons of river stones (weights) are placed on top. Most of the vats in use at Maruya Hatcho miso are over 100 years old.

We spy with our little eye, #kikusui Perfect Snow,

Happy almost Friday! How about breakfast for lunch

Everyone, meet Grounds Keeper.⁠ ⁠ Made with Sh

Happy Mother's Day to all the beautiful moms out t

Clam miso soup is so simple yet so satisfying.⁠