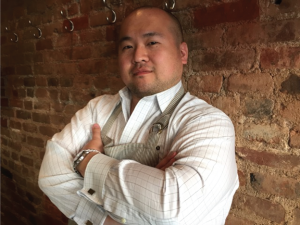 "The Fundamentals of Ramen Noodles & Soup"

Born in Taipei, Taiwan, George Kao moved to the United States to only move back to the Far East to Japan during his childhood years. There, attending an international school right in the middle of Tokyo, Mr. Kao was introduced to food and culture from all over the world. Mr. Kao's love for food and culture grew as he traveled during the summer breaks with his family to all parts of the world.

While pursuing an economics degree at Michigan State University, and interning at prestigious financial firms both in NYC and Tokyo, his passion for a career in food service over Wall Street was becoming apparently clear.

Mr. Kao decided not to pursue a career with Goldman Sachs and entered the world of culinary gastronomy by becoming a National Sales Representative for D'Artagnan, a gourmet specialty foods purveyor in NYC. After honing his craft and becoming a specialist in Foie Gras, Truffles and prime cuts of meat, Mr. Kao had a unique opportunity to work with New York Mutual Trading.

There, for 6 years, Mr. Kao became the company's Beverage Educator and was responsible for growing awareness of Sake, Shochu and Japanese Beers throughout the East Coast.

After 6 great years of cultivating relationships and building distribution lines, Mr. Kao found himself with Sun Noodle, a family owned third generation ramen noodle company founded in Honolulu, Hawaii. Mr. Kao is currently the Director of Sales for Sun Noodle, and is responsible for introducing Sun Noodle Brand ramen to a national and international customer base.