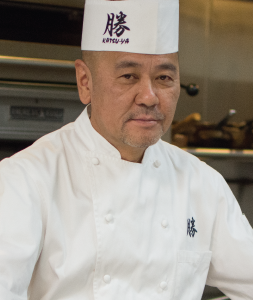 As one of only a small select group of Master sushi chefs in Los Angeles, Chef Katsuya Uechi brings culinary artistry and restaurant operations to the world. Katsuya Uechi was born and raised in Okinawa, Japan. He is known for his distinctive style and first-rate execution of high-quality dishes. Chef Katsuya is recognized as one of the major trendsetters in the world of Japanese cuisine.

Chef Katsuya apprenticed in the sushi bars of Osaka, Tokyo, and Okinawa before he ventured overseas to the United States. A classically trained chef, Katsuya Uechi came to Los Angeles in 1984. After working as a chef in restaurants, Chef Katsuya opened his first restaurant, Sushi Katsu-ya, in Studio City in 1997. Here he received the loyal following which he won over with his inventive combination of Japanese and California cuisine. He skillfully evolved Japanese sushi and robata classics with inspired dishes and original creations like spicy tuna with crispy rice. In 2003, Katsuya produced “KOI” restaurant in West Hollywood. This both modern yet Zen-inspired restaurant quickly drew attention and earned great reviews. In May of 2004, Katsuya opened his second restaurant in Encino. It was an immediate success.

In June 2006, a collaboration with SBE, a global hospitality and entertainment company, was formed. To date, this successful partnership has been able to share Katsuya’s vision and Japanese cuisine to not only many places in the United States, but to several other countries in the world including the Middle East. Katsuya was named “Chef of the Year” by Angelino Magazine and selected by Travel+ Leisure as one of the best restaurants of 2007.

As Chef Katsuya’s companies grew, he faced issues finding and training young chefs. These chefs had grown up in various countries, and many did not have any knowledge about sushi or basic rules of culinary hygiene. Katsuya realized that there was a need for a place to teach young chefs in a logical manner otherwise they won’t understand why it has to be done that way. To resolve this issue, in Sept. 2008, Chef Katsuya and Mr. Kanai, Founder of Mutual Trading Co, started Miyako Sushi and Washoku School in Los Angeles, CA to teach the basics of Japanese cuisine and making sushi.

Chef Katsuya has been featured on several news and cooking shows including “Top Chef” and the Japanese documentary “Kono Nihonjin ga sugoi rashii. Brand New Japan.” He has also starred in the feature film “Wa-shoku: Beyond Sushi,” and authored the cookbook Washoku of California.

Currently, Chef Katsuya has 25 restaurants with Katsu-ya Group Inc. and SBE, which include several concepts ranging from fast casual dining to elegant affairs, offering something for all tastes.